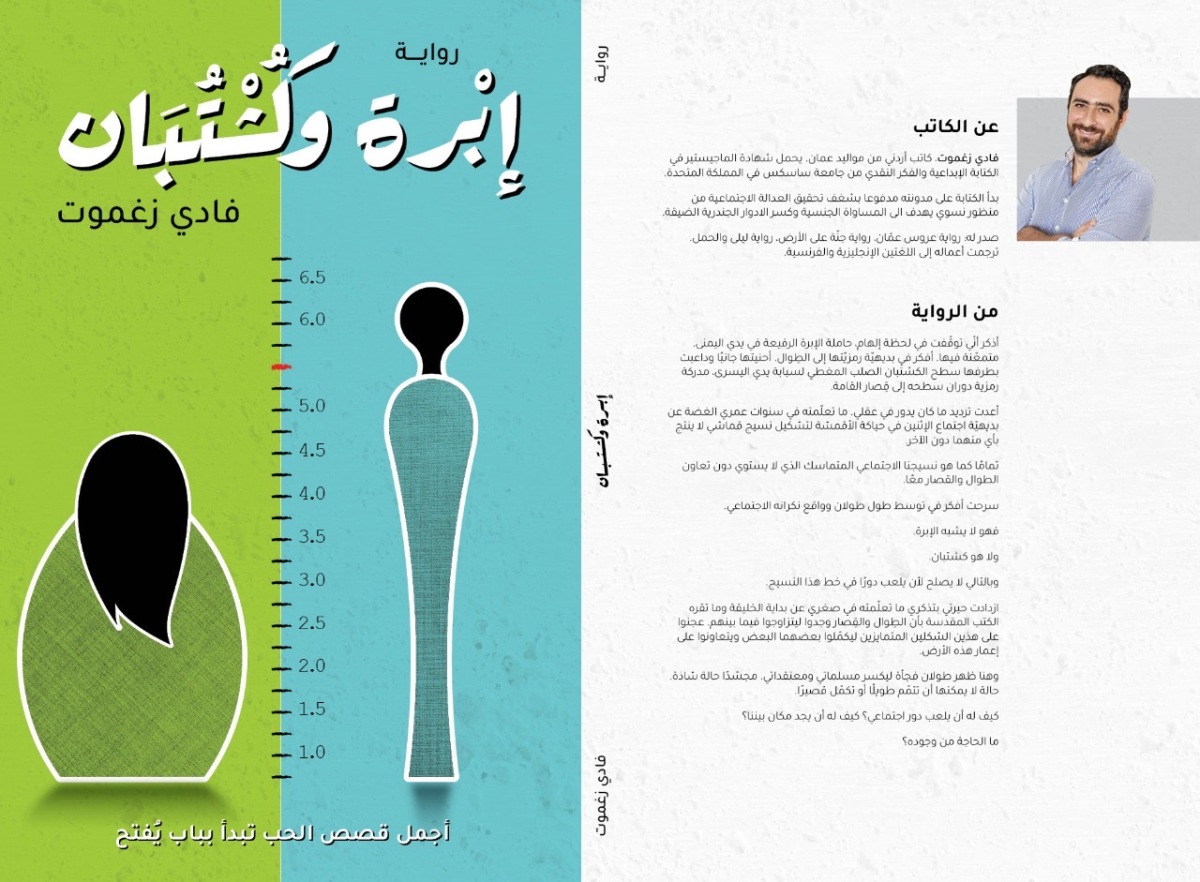 Jordanian author Fadi Zaghmout announced the release of his new book “Ebra Wa Kushtuban” (A needle and a thimble). A story that tackles the issue of gender creatively with an original concept.

“Ebra Wa Kushtuban” tries to imagine a society where gender is split based on height rather than sex. In this world Zaghmout created, sex becomes a secondary attribute and doesn’t play a major role in forming gender identity. Instead, gender identity and gender roles are formed based on the height of individuals. And like any other social divisions, the world of “Ebra Wa Kushtuban” suffers injustices and marginalization of different social groups. In this story, it is short people who are privileged and enjoy the upper hand, whereas tall people take a backseat. The plot revolves around a short dressmaker who falls in love with the middle height socially outcasted “Tawalan”.

Commenting on his book release, Zaghmout said, “I am a feminist gender activist. I have a passion toward social justice where there is equality between genders, where gender roles are not as rigid as we see in our societies. During the past years, I noticed that the term gender is not wildly understood. People find it hard to differentiate between sex as a biological attribute and gender as a social construct. After reading Judith Butler, of how gender is a social construct and how it is a performative act, I started to imagine a world where gender develops in a human society differently, to be based on height not sex for example. The book draws much from our daily life and tackles many most of the gender spectrum. I hope it adds to the conversations on gender in the feminist circles and society at large”.

Zaghmout added that this is the first time he does self publishing using the print on demand service that Jamalon made available to its customers in the region. Jamalon know to be the largest online bookseller in the Middle East, have introduced a print on demand service to cover the region and support Arab writers to fulfill their calling. “I am happy to cooperate with Jamalon in publishing this book. It is a new experience for me and I look forward to exploring the potential of self publishing”, Zaghmout commented.

In addition to the ease of publishing and distribution Jamalon service provides, Zaghmout announced that he will make his book available in two different cover designs. He revealed both covers live on his Instagram page, asking his readers to vote for the option of their choice. Since the results were split, and it is a print on demand service, then “why not make both available?”, he exclaimed. Jamalon’s service allows for it easily.