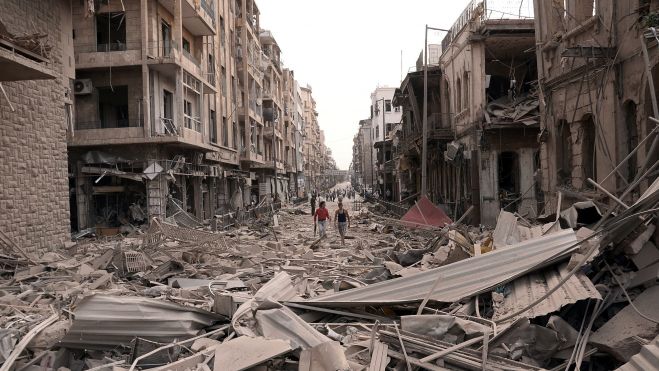 During the madness of war, one can’t possibly weave story that tells it all. There is no story that would ever show the whole picture of the horrors happening in Syria. Media news channels may focus on numbers, numbers of bombs, chemical arms, casualties, refugees, migrants, etc. They may focus of the political divide, the power struggle, and the calculations of winning and losing. People from the outside, may take sides, ignoring the fact that the loss far exceeds whatever media channels could cover. It is the loss of an entire nation (not a country) because it is the loss of people that matters. The stories of each individual affected in this power play are the real stories that should be making the headlines.

Last week, during the follow-up of the YLVP13 (Young Leaders Visitors Program) in Amman, I met a young Syrian guy. Ibrahim Al-Assil introduced himself to me as one of the members of the Syrian non-violence movement. A movement that aims to bring back sanity to the country, calling for change via non-violent means. He, along with his fellow members of this movement are courageous admirable people. He was jailed and tortured before, released and moved to the UAE. Yet, he refuses to settle with the comfortable life in Dubai, and plan to go back to Syria in order to push for the non-violent movement agenda. He told, “Syria needs us, we can’t leave to mad people”. He believes that with communication, he, and his fellows, can help those people see the madness of their action and talk them back to their sane self.

Though part of me think he is mad himself, going back in a suicidal mission to convince armed fighters on the ground to drop their weapons and adhere to non-violent methods, yet looking at his passion towards this cause, I could only admire the amount of humanity he has in his heart. It is only because he is humanly beyond our imagination, that he sees the humanity in the hearts of those fighters and thinks that he could reason with them. It is beyond media coverage, beyond political leaders, beyond ignorance and madness. It is people like him that Syria needs right now, people like him that gives me hope.

I am sure that each and every Syrian has a similar story to tell. Wars may have the capabilities of bringing out the worst in us, but they are very well capable of bringing out the best in us as well. I met Dana Dajani, the Director of Madrasati initiation at the Chevening Regional Conference. She was telling me that she wishes she could capture the amount of stories she hears because of her work. One of the touching stories is for a Syrian little girl in 2nd grade who lost both of her parents for the war. She came to Jordan with her grandmother. One day she headed to a nearby school and wanted to get in to study. Sadly, they didn’t allow her in because the school was full and there is no space from more students. The little girl tried to argue with the school principal, telling her how good she is in languages, that she knows how to read and write, and that she even memories poems! They refused her entry, only to see her next day bringing a carpet, placing it on the floor at the gate of the school, and telling them that she will do that everyday till she gets her right for education.

Another story comes from a school in Karak. A little Jordanian girl gives her daily allowance of 30 pence to her Syrian friend. After few days, her teacher got worried, she thought that maybe the Jordanian girl is bullied to do that. She asked her, why are you giving your allowance to your Syrian friend. The girl answered “I would spend my allowance on buying chips, but my friend would spend it on buying bread, she needs it more”.

There are only 3 stories among millions of stories that we fail to capture. I just wish that the media focuses more on the human side of this struggle rather than echoing the loud voice of the political powers.

Do you have something to say?