The Bride of Amman – Q&A with Translator Ruth Ahmedzai Kemp.

No one can deny Egypt’s influence on the culture of the Arab world at large. In the past 3 decades we have been witnessing a rapid growth of religious extremism, projection towards more conservatism, expansion of patriarchy and inflation of masculinity. The Arab Spring brought hope for change, with young women and men activists demanding more freedoms and rights. Unfortunately, our Arab Spring has been highjacked and the aftermath was devastating. Yet, young activists won’t surrender to darkness, because whenever and wherever there is injustice, there will always be justice fighters.

A group of young Egyptian want to challenge social taboos and bring up untold gender stories. It is a great initiative that I wholeheartedly support. I had the chance to interview Mona Al Shimi from Bussy and ask her more about this initiative and the crowd funding campaign they are running to support it.

Fadi: Tell us more about Bussy

Fadi: I bet that there are many untold stories here and there is a big need to hear those stories. Where did the idea behind Bussy come from? 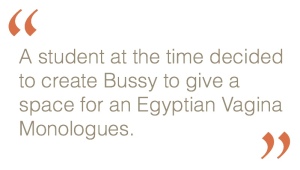 Mona: In 2005 Eve Ensler ‘s Vagina Monologues was performed at The American University in Cairo. While audiences felt very moved by the courage and honesty of its content, they longed for something similar coming from Egyptian culture, something they could personally relate to more. A group of students led by Naz Khan a foreign exchange student at the time decided to create Bussy to give a space for an Egyptian Vagina Monologues. Flyers were created round campus titled “share your story” with the option of anonymity given, and in 2006 Bussy gave its first performance at AUC theatre. Today Bussy is no longer a student organization, has expanded beyond AUC, and is no longer limited to women.

Fadi: I just read a friend of mine on Facebook saying something that rationalises the globalisation of the feminist movement as a response of the globalisation of same oppressive agencies. Having said that, a culture specific flavour always exists. Who is behind Bussy? What’s your team like?

Mona: We are a small team of independent youth led by manager and director Sondos Shabayek. She has completely dedicated her life to the project.

Fadi: Why do you think there is a need for women and men to talk about their experiences that are related to gender? 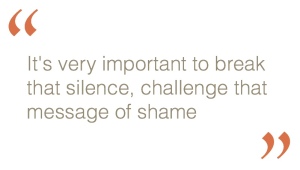 Mona: From the moment we are born we are taught to invalidate our own feelings, our personal experiences… To deny our inner worlds, and only accept and communicate what has been presented to us as “normal”. By not sharing we each live in the illusion that our personal experience is shameful and that we are alone. As the mass silence continues this message of shame keeps getting reinforced and individuals suffer from extreme self-judgement. It’s very important to break that silence, challenge that message of shame, and give people a space to express and listen to the stories of others. It helps individuals heal and accept themselves, and on a larger scale breaks the social fallacy that’s imprisoning the masses.

Fadi: How do you think theatre as a medium can help brining these stories up?

Fadi: You are going to address taboo issues related to gender. Do you think the social climate in Egypt is ready for such stories?

Mona: We always have to be a few steps ahead from what the social climate is ready for, otherwise no significant change is achieved. However, it is also important to work gradually. Taboos come in layers, and if you follow the order of such layers in your unfolding process, it makes the process smoother. It is important to understand that the core objective is not to challenge the society, but to heal it.

Fadi: I like what you said about healing society, yet I am sure that you are going to face huge challenges in doing so? What kind of challenges are you anticipating?

Mona:  More of the same challenges we are currently facing; financial sustainability, freedom from censorship, and finding safe performance spaces.

Fadi: You started a crowd funding campaign to overcome the financial side of this initiative. I hope you succeed in securing funds needed to keep this initiative alive. Do you have a certain goal or objective that you want to achieve? How many women and men are you going to reach to? How many stories are you aiming to bring up to the surface?

Mona: So far we have gathered stories from over 500 people in 5 cities and held 20 performances. We aim to expand those numbers, explore more cities, more rural areas and reaching out to those who are isolated and unheard. Next year we are aiming to travel to 3 new cities, collect a 100 stories, and hold 4 performances.

On the longer term we also hope to expand to other artistic mediums. We plan to upload are full archive online in order for everyone to have access to the stories, and eventually create a book in English and Arabic with a selected collection. We also hope to upload filmed testimonies online and keep filming more. Despite the power of theatre, these mediums are more accessible to a wider scope of people, and that’s why we need to expand horizontally.

Fadi: The campaign is nicely done. It is touching to see young men and women demanding a safe place to tell their stories. So far, you have secured $4,414 out of $70,000 goal and you have only 13 days are left. What activities are you planning to meet your goal?

Mona: We’re trying to reach out as widely as possible on social media round the world especially to those passionate about our cause.

Fadi: I hope the readers of this blog help in making this campaign successful. Who are your current supporters?

Mona: Though our circle of support is small, we are grateful for their loyalty without which we would not have been here today.

The Greek Campus, and Goethe institute have kindly shared rehearsal and performance spaces in the past and continue to support our cause.

We have also previously received financial support from the British council, the Swiss Embassy in Egypt, Frida, and Pioneers of Egypt.

Fadi: Thank you Mona. That is a noble cause what you are after. I hope to see Bussy successful and copies/expanded to come other countries in the Arab world.

Readers, if you enjoyed this blog and feel passionate about sexual and body rights, then go ahead and support Bussy here. Let’s help them succeed.

I am excited about the launch of “The Bride of Amman” in English. It is already up on Amazon.com for pre-orders in both a paperback version and as a kindle version. I have also created today a giveaway of two copies of the book, you can enter by clicking here The Bride of Amman (you just need to be a US resident.