Such a nice review.. thank you Merissa

Congratulations, Fadi, on a well-thought out and neatly woven novel. You have captured the most intricate and most intimate layers of our Jordanian social construct in an emotional and deeply stirring tale of many tales. You have done a marvelous job in deconstructing our society’s norms through each character’s thoughts and feelings that are often unheard, unsaid and almost always dismissed if ever expressed vocally. Amman Bride, to me, is about identity…how your gender in our society defines your identity and thereby decides FOR you, your status, your role, your boundaries, your lifestyle, your behavior at times and your scope of activities. What is most inspiring about your women characters Laila, Rana and Hayat is their inner strength to challenge society and to overcome their inner most fears, confusion and hesitation not only to find peace and happiness but also to try to understand who they really are as Ammani women. Ive always believed in the power of human stories to instigate change; change of attitudes and norms towards gender inequality (especially women) which, continues to delay our growth and evolution as a society. Amman Bride is a breath of fresh air for the struggling survival or should I say revival of the Jordanian novel, which deserves our full support as Jordanians. When I read the Girls of Riyadh a few years ago, I thought to myself; I wish I can write the Jordanian version. You beat me to it! Congratulations once again and I look forward to your next one inshallah.

It was an honor taking part of SEVEN yesterday, an international play that highlights that stories of seven women activists around the world. During the reading, I came across this story of a Nigerian woman whose family wanted to marry her off to an old Saudi man and whom escaped before her wedding dishonouring her family. The script goes on to describe how this Nigerian woman wanted to reconcile with her family and how after two years she seized the chance of a holy day and went back, apologising for her father, who welcomed her back into the family with open arms.

That is when it hit me how similar this story to the ending of Rana’s story in Aroos Amman. How Rana’s father forgave her after two years of her escaping the country and stood up for her against his family and social mandates.

Many have claimed that the ending of Rana’s story in the book is far fetched, they claimed that such fathers’ reaction doesn’t exist. In reality, I believe that it exists more often than we realize. Both of those stories are a reflection of real stories. Those men, who we fail to highlight their courageous stand in championing the love of their daughters and their freedom of choice against strong social values, are real. Men are not strong as we believe they are. We tend to tie manhood with strength and then translate that into giving men the role of imposing inherited social values that hurt our beloved ones. Men flexes their muscles to apply the social laws that they can’t stand up to. That’s not a real strength for me, that is not noble, and not manly. Real strength is standing up for the ones you love, respect their freedom of choice, and protect it.

END_OF_DOCUMENT_TOKEN_TO_BE_REPLACED

All copies of  my first novel 3aross Amman ran out in less than a year. We have been out of copies for a month now and working hard to get the second print out in its best shape. That is a huge success in local terms of books sales that makes me so happy and proud. I would love to thank each and everyone of you who helped me through the process of writing the book and promoting it, who loved it and shared it with their friends and who connected me with different media outlets and gave me a space on their pages and media spaces.

END_OF_DOCUMENT_TOKEN_TO_BE_REPLACED

Beyond The Pleasure Principle

Although, as my friend in class stated, reading psychoanalysis does have an effect on the reader in a sense where s/he starts reading more into her/his own daily choices in ways that s/he never thought about before.  It has to do with the realisation of the power of the unconscious and its relationships with the psyche internal different drives.

Two days ago, I was reading “Beyond The Pleasure Principle” chapter of Freud’s Reader before going to bed. Later on, I had this dream that really annoyed me, woke me up feeling bad about myself and immediately trying to find a link that connects it to what I read. In the back of my mind, and not sure if this is true, I think that I had a similar dream few days ago, also after reading another Freud text.

The annoyance in the dream came out of the moral failure highlight of it. Now, thinking about it, it is the ending of it that defines the dream in much the same way Freud tries to argue about “death drive” in that chapter “The goal of all life is death”.

END_OF_DOCUMENT_TOKEN_TO_BE_REPLACED

Mother shouted in frustration for the 10th time in the past 30 minutes. She decided then to come up to Haya’s room and have a direct talk with her teenage daughter.

Mother stopped short of completing her sentence, startled by the number of noses thrown around in Haya’s room.

“OH MY GOD! HAYA! What have you done??! You wasted all of these stem cells!“

“Easy mom.. easy.. I didn’t do anything.. don’t worry about stem cells. I got a good deal and can easily recycle them. You know Apple has launched new Cell-Recycling machine that is compatible with their 3D iPrint-ers. I will buy one tomorrow and will come eat my food in a while”

END_OF_DOCUMENT_TOKEN_TO_BE_REPLACED 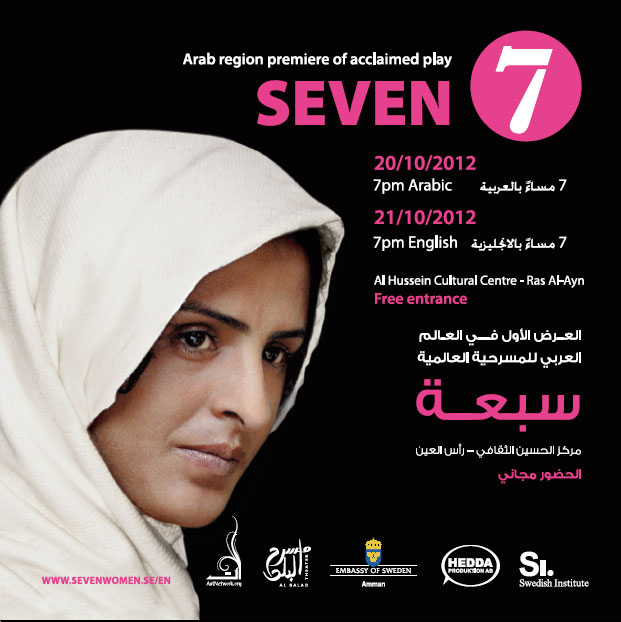 I am honoured to be part of a play presented by Swedish Institute and embassy that highlights women rights around the world. The play called SEVEN will be shown in Amman for the first time this month on Saturday 20th, Oct and Sunday 21th, Oct. I will be taking a role in the Arabic version of the play alongside some amazing Jordanian women:

That is quite an honor to be among these women and read a woman’s part.

If you can’t make it to the Arabic version on Saturday, make sure to make it on Sunday. The role I am playing in Arabic would be played by the beautiful Swedish Ambassador in Amman Charlotta Sparre.

Here is the event’s page on Facebook. Join in and invite your friends 🙂

I am pretty much impressed with the Utopian worlds in literature that I had no idea existed before I started my “Creativity and Utopia” module three weeks ago. There is a huge amount of astonishing creativity in those imaginary worlds that keeps you wondering about the brilliance and intelligence of those writers who were able to break down all of the social systems they were bound to and create new brave worlds.

We have started with Thomas More’s “Utopia”, then delved into HG Wells’s “The Time Machine” and Edward Bellamy “Looking Backward” (which I missed reading) and this week “Brave New World” for Aldous Huxley which I should finish by Thursday along with George Orwell’s “1984” and Yevgeny Zamaytin’s “We”.

I don’t know why, but I find this genre of literature to be very compelling. I discovered a hidden passion towards exploring those worlds. I guess it has partly to do with my understanding of Utopia not to be an alternative perfect world but an alternative set of systems that is applied in an imaginary world where it helps improving or making worse the life of its people. For me, the current systems of living is a Utopia on its own.  A Utopia that is ruled by a set of beliefs and rules that are constantly being challenged, harshly by ideas, and shyly by application. It is a Utopia that is not perfect but improved continuously with reviews and tweaks.